I was accepted and entered the Air Force, early in September 1967. I was initially stationed in Texas for several months. Then I was sent to Cam Ranh Bay, Vietnam in December 1968, assigned to 12th Combat Supply Unit.
It was a very quick awakening. War is something that can’t be described. Try as you might, some things you can never forget or erase. I remember flying body bags back and trying to act tough like there was nothing in them. Witnessing death and serious injuries to Americans, civilians, and even the enemy. Today, I still remember the smells and sounds. As simply put by others: war is hell.
I was able to come home in December 1969 and I was so looking forward to it. I soon discovered being a returning Vietnam vet was not a welcoming, “thank you for your service,” experience. In fact, it was the opposite. I developed my own safe place and didn’t wear any military clothing off base. Trying to blend in, I guess. I formed my own cocoon to live in.
I was discharged in September 1971. I still felt that I wanted to be part of a structured organization like the police or firefighters. So, I became a police officer with the City of Lacey in March 1972. I am retired police officer, after 20 years. I currently own a Pawn Shop.

After a few years, I began having health problems related to Agent Orange and I am still working through them. I realize there are scars from war that reoccur and I tried to medicate myself for years with alcohol. I didn’t let anyone in my cocoon. I didn’t share what was happening with anyone which in part played a part in three failed marriages. Many years passed. I quit drinking. Still, something was missing.
A few years ago, one day seemingly out of nowhere I received an invite from Jason Brown, the president of Outdoors For Our Heroes (OFOH). He invited me on a pheasant hunt at Miller Ranch in Cheney, WA with two other disabled vets. I accepted. Jason and I arrived at the motel in the evening, the other vets didn’t arrive until later. We didn’t meet up until early the next morning for a little breakfast at the motel. The other vets were Afghan vets, young guys, Samuel Shockley and Daniel Fye. Sam is a double amputee and Daniel is a single amputee with his other leg badly injured. For me, it seemed uncomfortable at first. There wasn’t a lot of eye contact and not much was spoken. When we arrived at Miller Ranch we were welcomed and briefed on safety issues and on the hunt. OFOH had a track chair for Sam, then Daniel and I walked.

The first bird that got up, Sam shot quickly. The second bird I promptly missed. I don’t know how many I missed before Sam started in on me. Yelling “What’s the matter old man? Can’t keep up?” I thought Vietnam vets were tough and on and on. At one point I told him if his track chair had tires instead of tracks, I would let the air out in the middle of nowhere. Ahh, I love the smell of camaraderie in the morning.
As the day went on, all three of us verbally bantered back and forth, and without realizing it a bond was being formed. I had a discussion with Daniel. I shared some of my Vietnam stories with him and how when I came home, I wanted to be a firefighter or a cop. He told me he wanted to be a firefighter since childhood, but didn’t think he could make it now with his injuries. I told him he could do anything he wanted if he set his mind to it.

The Miller Ranch Hunt – from Left: Jason Brown, Sam Shockley, Barney McClanahan, and Daniel Fye
We had an awesome hunt with wonderful people. At the end of the day, the three of us were sitting together and sharing the moment. I remember Sam telling me thank you for giving him crap and not treating him like someone who needed to be pampered. I thanked him and Daniel for a great time and we all agreed to keep in touch.
On the way home, I was overwhelmed with emotions. For the first time in 49 years I was feeling. I realized I had witnessed wounded people being taking away from combat but never got to see any form of healing, or how people live or cope with severe injuries. These two combat brothers were it and they accepted me into their world. I finally felt I was home and it was okay to feel again.
As Jason and I were driving back, tears began streaming down my face and Jason jokingly told me it was okay that Sam outshot me. I tried to laugh then I explained that this hunting trip with OFOH had changed my life for good, and that I wanted to give back, so other vets can take part in these moments. 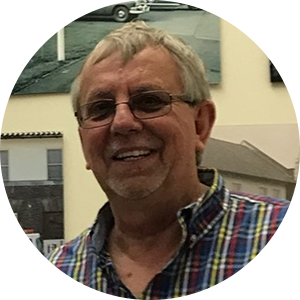 Outdoors for Our Heroes is not just hunting organization; it’s a family. OFOH brings guys from all walks of life together who have served in some of the most hostile environments, and takes them out hunting while enjoying the healing power of mother nature. My name is Samuel Shockley, and I can say that I am a better person because of the relationships that were built through OFOH, it was the driving force in me reaching some of my goals by surrounding myself with positive people who believe that I could achieve. This was not always the case, I had no ambition or drive to do anything outside of my daily routine. This all changed when OFOH, took me hunting in late fall of 2016. I met Jason and Barney for the first time, and from that point on we have shared many laughs and a lot of smack talking. Since 2016 I have been on some hunts that are considered hunts of a lifetime such as hunting mule deer and Antelope in Montana. I had a fantastic time rolling through the backcountry with OFOH representatives who ensured I had the best experience possible. I believe, I genuinely have achieved some of the best healing you could ever get, and this was all thanks to OFOH. 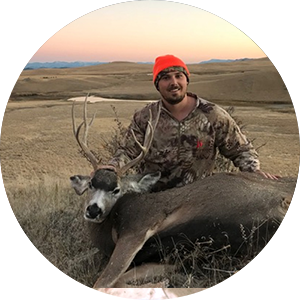 I have had the pleasure of being on a few hunts with OFOH. Each of these hunts has provided me with unique experiences of healing. Whether it was talking with Jason himself, other OFOH staff, or other veterans; I have taken something new away from each experience. Most notable was the deer hunt in Eastern Washington OFOH sent me on last year. It was amazing to see so many animals, to be able to share my experiences with my guide, and to be able to harvest my first deer in 28 years. More importantly, there were two other disabled veterans on the trip (one that was just leaving the next day and one that stayed with me during the 3 day hunt). We shared our experiences in service, joked around, and talked about some of the struggles that we face. One thing I realized is that even though our experiences were very different; they affect our lives similarly. We experience very similar struggles psychologically and emotionally.

I am not one to openly share my struggles with strangers. When OFOH sent me on my first hunt (my first ever duck hunting trip) with Jason I realized that hunting with another person, even though I had only met Jason once before, put me in a more relaxed frame of mind and made me more comfortable sharing my story. That trip set me up for success on future hunting trips with OFOH. It allowed me to feel more comfortable talking with other disabled veterans on these trips. That is what sets Outdoors For Our Heroes apart from some other organizations; they believe in continuing support for disabled veterans. They realize that our heroes need more than one opportunity at healing and these hunts provide an opportunity for disabled vets to generate a network of friends who are also disabled veterans. I appreciate OFOH more than words can express! When Jason first introduced me to OFOH I was probably at my lowest point mentally that I had ever been. Things had gotten bad enough where I sought help from a psychologist (something I never thought I would do). I would say that my hunts with Outdoors For Our Heroes has done just as much for me as my psychologist. It’s not just the hunts; it’s the network, the knowledge, and shared experiences that make it so effective. The staff at OFOH truly cares about each and every one of us disabled veterans and our healing. Thank you OFOH! 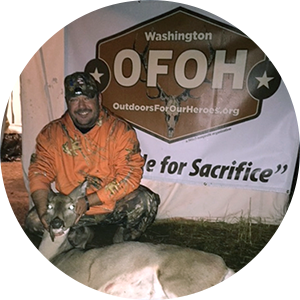